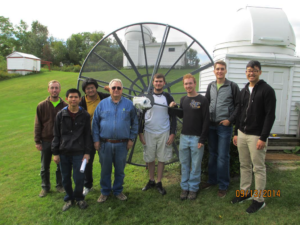 We are in our third year of active development projects to look at the night sky in the Radio Spectrum and have been able to complete some major accomplishments. This past school year has seen both the University of Rochester (U of R), and Rochester Institute of Technology (RIT) deliver critical elements to the Solar Radio Spectroscope.

For our educational outreach event, we hosted a Boy Scout troop in Ionia (Pix_1), for a sleep over this last spring and were able to make our Portable Radio Telescope (PBT – itty bitty radio telescope) operational. It’s now completely portable, with battery power for ‘field’ use, with a high resolution turntable (better than 2 degrees angular resolution, Pix_2). Scouts had a great time ‘seeing’ their own body heat giving off RF energy, looking at the RF emissions from the Sun and finding Geosynchronous satellites in Earth orbit.

The Solar Radio Telescope project is coming together nicely. The purpose of this project is to study RF emissions from and ‘Angry’ Sun (visible sunspots, Pix # 3). We are elated that our Solar RT project was selected by RIT’s engineering department’s competition for their senior design activities. A team of seven students (Pix_4) designed phase II for our project to track the Sun in its daily movement. This effort includes customer requirements, animated simulations of the Sun’s movement from summer through winter, the PC, electronic controls, software, servos, and mechanical mounts. The spring semester saw this concept design executed in hardware, built in the RIT model shop, debugged in the lab, and then installed in Ionia! The pinnacle of this effort saw completely autonomous operation of Sun tracking without any human intervention (Pix_5), publically demonstrated at RIT’s Imagine Festival in May 2015 (Pix_6). Additionally, this design ‘puts itself to bed’ at night, knows when to look to the East for sunrise, and has a high wind ‘safe mode position (zenith), and park service (maintenance) position.

If this (above) accomplishment wasn’t enough, work done by the U of R team, allowed us to implement the real horizon in ‘Radio Eyes’ (our RF star data base). And their software control of the Callisto receivers allowed us to complete a RF site survey of the Ionia ‘scope location (Pix_7). Our proof of concept prototype was able to characterize the potential interfering emitters at the Ionia site (Pix_8), and provide actual usable RF Sun emission data. This work has established a new (potentially proprietary) mathematical technique for active noise cancellation of base (fixed location) interfering emitters. To our knowledge, no one in the Radio Telescope and/or eCallisto development community has seen this before.

Our plans for this coming year include expanding the small dome building (adjacent to our installation) enabling a corner of the building to act as an operator/debug station, a high speed internet and AC power connection, batch data transfer to Zurich, and system software integration.

Most people think they have to have a 50 foot dish in the backyard to do any Radio Astronomy. It just ain’t so!! Besides getting on your wife’s short list for casting a large dark shadow over her petunias, with the way things are these days, you might even get a visit or two from ‘Uncle ‘Sam’.

Everyone has seen colorful visual pictures from Hubble of deep space Galaxies. But many don’t realize that deep sky objects have strong RF emissions, as well. Even some objects in our own Solar System give off radio waves in various frequency bands. The Sun and Jupiter are two of those objects in particular.

You may have seen or heard of articles about the ongoing Solar RT project which is a Solar RF Spectrograph to study sunspots, presently being built for the ASRAS astronomy club (site in Ionia, NY). It covers 50 – 890 MHz. This is a senior design project at RIT and it is progressing nicely. Look for a demo at RIT Imagine this May (2015).

Another stout RF emitter is the planet Jupiter (see NASA Radio Jove, below). The radio noise storms of interest can be heard from about 15 MHz up to a practical limit of about 38 MHz, the consensus seems to be that 18 MHz up to about 28 MHz is a good place to listen. Many ‘hams’ have inadvertently heard this, and assumed it was just background noise & hiss (links, below).

The very conditions that cause the ionosphere to get charged and yield good Aurora & ‘DX bounce’ at times, are one’s that ‘shield’ us from hearing these signals. When the aurora is good, the Jupiter signals are usually rather weak, since they can’t penetrate the same strong ionospheric ‘shell’ that surrounds the Earth. Conversely, when the aurora is bad the Radio Jove signals can be good, they can actually complement regular Northern Light observation & Ham Radio operation.

The RF generator of these signals is an interaction of some of Jupiter’s Moons (typically IO), and the planet’s strong magnetic fields. These signals can be directional, and don’t always point at the Earth.

A simple direct conversion receiver and external antenna for the above band(s) can be used to monitor these signals  We’ve been gifted a NASA Radio Jove receiver kit from the Buffalo Astronomy group, and are in search of a high school or college student willing to assemble it under the mentorship of an experienced ham radio operator. Know of someone interested, drop me an email note or give me a call.

For further reading check out some of the following links;

Hi all,
If you’re out at the site & or looking at the security cameras lately you’ve probable noticed that the RT project dish is ‘missing’. Well its been relocated to the MSD lab at RIT for now.  We’re in the midst of our hardware build as part 2 of the senior design project (P15571 – ‘Sun Tracker’).  http://edge.rit.edu/edge/P15571/public/Home
We’re into our second year of projects to look at the night sky in something other than traditional visible light. 2014 has seen three colleges now involved with ASRAS Radio Astronomy Projects! We’ve been able to so far involve 15 students from Roberts Wesleyan, University of Rochester, and Rochester Institute of Technology.

The specifics of this task are to build a computer controlled, motorized, RA & Dec mount for the 7′ dish driven by our ‘Radio Eyes’ software. Design effort has been rather busy & intense.

We are just entering the machine shop to build part of the hardware mounts & decided to relocate the entire unit to the RIT model shop to enable fit/form of the hardware pieces.  This was much better than making a trip out to Ionia every time we need a critical dimension or piece part.

The spectrograph receiver is working great under automated computer control, we are able to generate an FFT of interested frequencies (45 – 890 Mhz) every 15 min! We’ve also sampled the RF environment in Ionia to begin identifying potentially interfering emitters. I will report on that next month.

We were invited to attend the Solar Star Party in the courtyard of Rockland Community College (site of NEAF), along with optical Solar Telescopes. Using our nearly completed Portable Radio Telescope, we demonstrated radio emissions coming from the Sun, and warm body RF emissions from living things (trees, people, etc.). This was an instant hit, especially when we were able to track RF emissions from geosynchronous satellites in the stationary ‘Clark’ orbit, including showing a ‘strip chart’ record of the results on a laptop PC. Successful demonstration of our high resolution ‘turntable’ antenna for the IBT enabled repeatable 1-2 degree pointing resolution, and digital data to the netbook PC. (Picture #1). Magazine editors, including two from Europe asked if we’d consider contributions to their publications, (including an offer from a book publisher!). We gave away every piece of paper, business cards, and web address info pointers to the crowds. It seems that no one in optical astronomy has considered actually doing astronomy in the RF spectrum, thinking it was outside the realm of amateurs (our plans are to change that). Amateur radio operators (‘Hams’) saw our efforts as a logical extension of their field. Hint – our 2015 plans are to build a ‘bridge’ to the local Radio ‘Ham’ group (Rochester Amateur Radio Association – RaRa). One of our U of R students has even successfully characterized a set of Low Noise Amplifiers (LNAs), using a simple set of CFL light bulbs as an RF source (topic for a future RaRa talk). Ultimately, once we write an operating manual & create experimental worksheets, this PBT will become a Boy Scouts activity in Ionia (probably the summer of 2015), when they can camp-out there on weekends, (even if it’s cloudy).

The Solar Radio Telescope project is coming together nicely. The purpose of this project is to study RF emissions from and ‘Angry’ Sun (visible sunspots, Pix # 2) This last school year, (Fall 2013, Summer & Spring of 2014 semesters), we have had U of R students working on getting both the primary & secondary receivers working under the control of a desktop PC (Win XP). The latest updated Callisto software (v118) has been loaded & has begun operating without any major problems. We have successfully loaded and run the initial ‘Radio Eyes’ Planetarium program displaying the night sky in the RF environment (like the visible Starry Night sky, but in the RF spectrum). Students have been able to measure the local horizon (elevation) in Ionia every 10 degrees of the compass, and generated an actual horizon file to display when celestial objects will come into view from our physical location (Picture #3). And have begun to design an operator’s ‘virtual’ front panel in LabView to control all critical functions, and programs. Two U of R summer students have just finished selecting PC hardware to be installed in a weather-proof enclosure with the 7 ft. receiving antenna, and run under Windows 7. We’ve even sampled the RF environment in Ionia to begin identifying potential interference sources. Our winter plans are to begin formulating a strategy to deal with this possibility.

We are elated that our Solar RT project has been one of the projects selected by RIT’s engineering department’s competition for their senior design activities. A team of seven students are designing phase II for our project to track the Sun in its daily movement. Suntracker Project Logo (Picture #4). This effort includes customer requirements, animated simulations of the Sun’s movement from summer through winter, and the servos, electronic controls, and mechanical mounts. In the spring semester (2015) they will actually build this hardware, take it out of the lab, and install it in Ionia!

Farash foresight & support of these special programs have created a unique environment that has not just benefitted ASRAS, but given students the chance to take concepts out of the textbook, and build actual working hardware, making for a solid, and lasting, engineering education. The scope of this effort will not only enable us to contribute to the eCallisto network, but give the Rochester Academy of Science global visibility & participate in an activity to study our ‘angry’ Sun’s sunspots, CMEs, and Earth directed potential hazards (Pix #5). As a long time ASRAS member, I feel that I’m blessed to be a part of this activity.